Author R. Leonia Shea writes fun fantasy with snappy dialogue and lots of magic.  Life is stressful, but there’s nothing better than crawling into a good book and forgetting all of the things that tried to ruin your day.  Since she was a little girl, Leonia couldn’t wait to hit the local bookstore with her mom on the first day of summer vacation.  It was a ritual that lasted well into adulthood, and books were always on her Christmas list.  As a writer, she creates stories around strong female characters who don’t have perfect lives, but they somehow manage to look at life with optimism while maintaining a sense of humor.  Being able to do that might just be how everyone can find a little magic.

The Relic Hunter Fantasy series is about a failed archaeologist looking for a new way to make a living using her neglected talent as a witch.  In a way, it was a parallel to my own life.  I was burned out in my current career and fell back on my former dream of being an author to escape the rut without necessarily abandoning my occupation.

I am fascinated by archaeology and legends, so my main character Dr. Arienne Cerasola checked all the boxes.  Not only is she smart, but she’s also funny and a total optimist. Ari does things scared – she doesn’t expect success, but she gives it her best shot by following her heart and doing the right thing.  I think that’s pretty much the point of life – do it scared, but do it as only you can!

I’m based in the Northeastern US, bouncing between upstate NY and Boston’s North Shore.  Having grown up in South Jersey and New York, I’m an east coast girl all the way.  Because of that, Arienne had to live in the Berkshires.  It’s a nice compromise between Eastern NY and Western MA, and I pass through there quite a bit.  There’s definitely room for a sidekick owl to fly around the converted barn Ari calls home.

My newest release is coming out this spring.  It’s the fifth full-length Relic Hunter novel, and it’s called Resistant Magic.  I’m also releasing the second book in my Fortunes series about Calypso Mendelsohn, a Salem psychic who’s a former con-artist trying to redeem herself.  That’s a common theme in my books – redemption, second chances, starting over.  I think we get into a career and a lifestyle, and changing things is so scary.  All of my characters are starting over somehow because I think that’s a shared experience most of us have either had or wish we had the courage for. 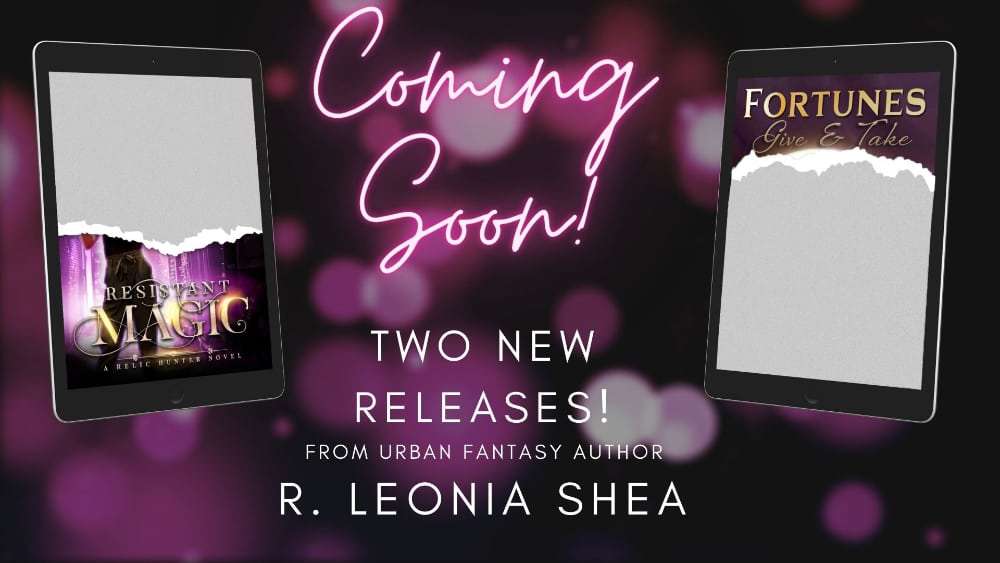 I started writing fantasy because my diabetic/blind dog didn’t like being out in the garden.  No lie!  I wanted to spend time with her, but watching an old dog sleep isn’t very exciting.  She’d nap, I’d write, and then I’d read it to her while I rubbed her belly.  I thought the first draft of Elementary Magic was pretty good, so I forged ahead, and the series began to flow.

I took a few years off from writing when my husband and mom became critically ill at the same time.  I released Legendary Magic while my husband was recovering from surgery because I had a deadline.  It was my last release for about seven years.  During that time, Ari and Caly nagged to have their stories told, and I finally relented during the pandemic.  Before I dove into Jealous Magic, I reread the Relic Hunter series and thought: wait, I wrote that?  That’s pretty funny.

I chose to write fantasy because that’s my go-to when I need to escape and lose myself in a good book.  My favorite series is the Jane Yellowrock series by Faith Hunter.  Jane is a lot more bad-ass than Arienne will ever be, but I love the humor and relationships in the Yellowrock-verse.  Kelley Armstrong’s Otherworld series is another favorite, and Jenn Stark’s Immortal Vegas is also addictive.  All have strong female characters with a sense of humor against impossible odds.  That’s kind of the crux of great fantasy, for me. 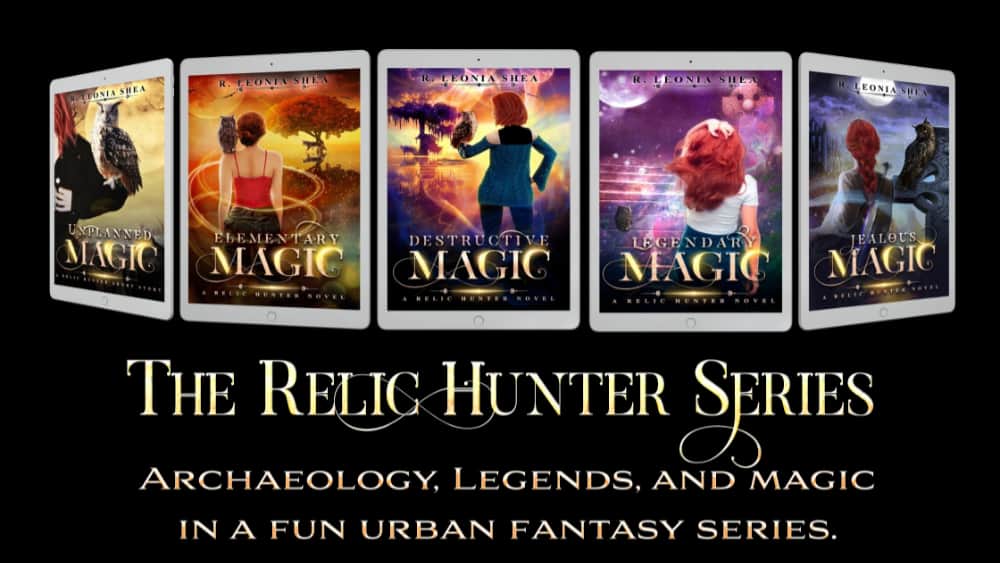 Would you recommend self-publishing to aspiring authors, or would you suggest a more traditional path?

I’m self-published, and honestly, I didn’t even try to be traditionally published.  Yes, I fantasized about a new career as a writer, but I was lucky and had a great career already that I didn’t want to give up.  The thought of dealing with editors who had a different vision of my books, relinquishing control to a publisher, and then having to deal with deadlines just made me cringe.  self-publishing was the only route I was interested in because I wanted writing to be fun.

Describe the road you took to publishing your first novel? And how that has changed.

Choosing self-publishing is one of the hardest things I’ve done because there are so many moving parts that I am responsible for.  The thing that has helped me the most is buying Mark Dawson’s Self-Publishing Formula courses.  Those lessons have given me a roadmap to getting things done, and I’m more successful with the SPF knowledge than I ever was on my own.

That’s the essential piece of advice I have for new writers.  Find a good course put together by someone who really can sell books and work your way through it.  Then revise your plan with every other scrap of information you find.  Some things will work for you, and others won’t – but if you don’t try, you’ll never know.  You can’t throw a book on Amazon and cross your fingers.  The lack of reviews, slow sales, and category rankings are soul-killing, and your writing will suffer.  If you put out a quality book and take the time to build your tribe, you’ll never regret the investment you made in yourself. 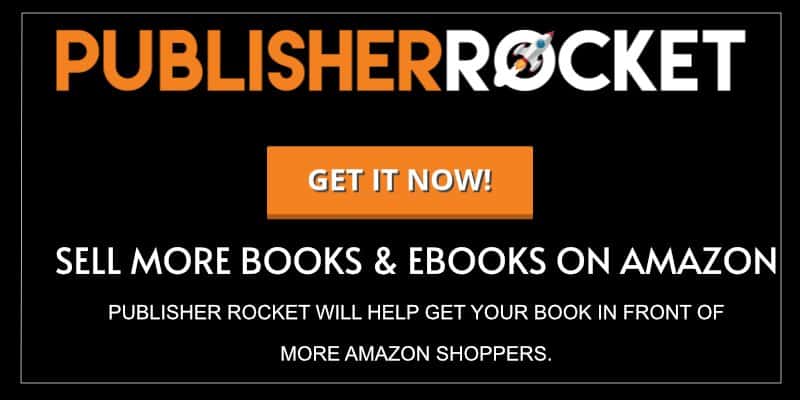 What are the best experiences in your writing career?

The most exciting thing (aside from reading my reviews) has been the fact that I honestly think of myself as a writer now.  I did the National Writing Project’s Write Across America this past summer, and my first piece will be published in Louisiana Literature this spring.  I’m super jazzed because it’s the first thing I’ve ever submitted (besides a poem in 3rd grade, which won a local newspaper contest), and it was accepted.  In addition to that short piece, I wrote part of a short story set in New Orleans that became exclusive content for my email subscribers.  I knocked out two pieces doing that conference this past year during the pandemic, so I’m definitely doing that again this year!

It has been an incredible year for me, and I was nervous about continuing the series again after my long absence.  It felt like I was starting over, and I was struggling to remember the things I’d done the first time that had worked.  Once I admitted the world had changed since then – and that I had changed, I stopped looking for my old notes and just started fresh.  Last week, I received two reviews from readers who started the series nearly ten years ago, so I think that proves that people will stick with you if you’re writing authentically and passionately.

Advice on making an impact in today’s busy sci-fi and Fantasy markets.

My final piece of advice for aspiring authors is to write what you genuinely believe, in your own voice, no matter the genre.  If you’re wondering what I’m talking about, read Anthony Bourdain’s Gone Bamboo – and read the blurb about why he wrote that particular story.  It’s a great book, but his voice is so apparent that  I dare you not to hear him narrating it in your head.  If my voice as a writer weren’t authentically mine, it would have changed the latest releases’ tone and quite possibly wholly altered the series.  If that had happened, the experience wouldn’t have been the same for those readers who came back to it after a long hiatus.  The fact that deep down, Arienne’s story is a part of me makes the series fresh and relevant, even with a seven-year gap between books and even if I’m writing fantasy. 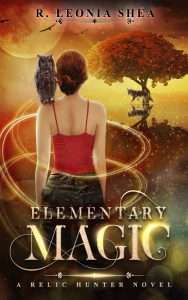 Sign Up for my Newsletter to be notified when the next Fantasy Author Interview drops.