His short fiction has been published by, amongst others, Kzine, Bewildering Stories, Liquid Imagination, and Far Horizons.

His debut novel, Pariah’s Lament, was published by Of Metal and Magic Publishing in March 2021.

When not writing, Richie works as an editor and digital marketer and teaches creative writing both online and offline, as well as speaking at events and conventions like Fantasycon.

Most nights you can find him up into the wee hours scribbling away or watching the NBA.

Find out more at www.richiebilling.com. 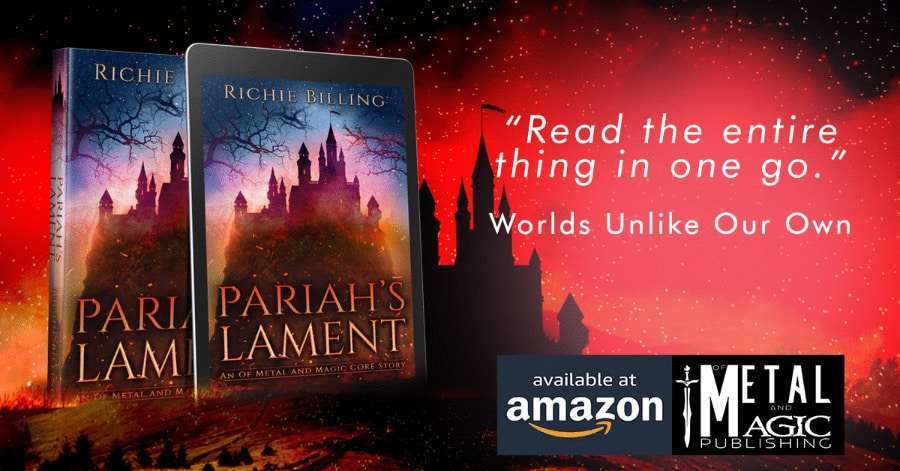 I’ve always loved to read fantasy, so it felt natural to start there when writing. Before my debut novel, Pariah’s Lament was released, I’d written a wordy beast of a novel. But an opportunity arose to write Pariah’s Lament so I took it and never looked back.

I adore an underdog’s story and this is what Pariah is all about. A tale of two unlikely heroes working together to stop the madness threatening not just their fates, but that of the entire nation of Yurr, the fantasy land within which the story is set.

Those two heroes are Isy and Edvar. Both from very different backgrounds, their stories follow independent arcs that meet and combine part way through the story. They both go on a journey of discovery and friendship and push themselves to limits they didn’t know they were capable of.

In terms of style, it’s been likened to Brandon Sanderson, so if you like medieval fantasy settings with a hint of magic, romance and a lot of battle scenes, you’ll enjoy this.

You can discover more about Pariah’s Lament here, or on my dedicated Pinterest board.

My latest release is an epic fantasy novel called Pariah’s Lament. It follows the story of two unlikely heroes, caught up in a struggle for power. And little do they know that they have the power to decide the fate of the nation.

What are you currently working on?

Elanta is the title of what I’m working on now. What started as a novella, which I’d finished, has developed into a novel after a chat with a publisher and agent. It was a planned duopoly anyway so hey ho.

I’m having a lot of fun writing this one. It’s from the perspective of a young mother. I’m a childless man so it’s been interesting. So far so good, according to my editor.

What inspires you to write?

When it comes down to it, to make a difference to people’s lives. Reading the words of others has helped and inspired me so much. I just want to give those feelings and experiences back. It might be through exploring issues in my stories, or telling the tales of relatable characters to help people understand perspectives. I just want my writing to have a point to it.

I always remember going to see Lord of the Rings at the cinema as a kid without any understanding of what it was. It blew me away. I devoured The Hobbit soon after and it became my favourite book.

Then came the Harry Potter craze. In the end, I felt like I spent more time living in my own fantasy worlds than the real ones. I had more fun there.

When drinking and going out took over, I set aside my love of reading and fantasy altogether. I didn’t pick it back up again until I was about 22/23. I’d started reading Game of Thrones, fell in love with everything about it. And then got into Feist and his mega Riftwar series.

After reading all of those books, I was set that I was going to write a fantasy novel.

Who are your favourite fantasy writers/ fantasy authors?

My favourite fantasy author is George RR Martin. Some writers are good at some things and not so great at others. GRRM excels at everything. His characters are compelling, plots intricate and intriguing, and his style of writing is majestic.

Raymond Feist is another I’d mention for his incredible storytelling ability. I read every single book in the Riftwar Saga and loved all of them.

What is your favourite fantasy series and why?

A Song Of Ice and Fire. People may bemoan me for being unoriginal or whatever but for me it’s on another level of storytelling to anything else I’ve read.

What are your favourite fantasy genres?

I’m quite the fan of low fantasy. Not the type which involves our world but stories set in a secondary world with few of the typical fantasy features, like magic systems.

I like high fantasy and epic fantasy too for the grand adventures, a bit of steampunk (Adrian Tchaikovsky) and everything in between.

Who are some of your all-time favourite fantasy characters? And why do you think they became your favourites?

Tyrion Lannister is my favourite character. I think GRRM did a masterful job. Tyrion’s life is riddled with conflict. So many aspects of it are contradictions—privileged but scorned and unloved, rich but poor (in other areas of his life). I love his intellect and moral compass and his courage too, despite the obstacles before him.

I could go on and on. For me, he’s one of the greatest characters ever written.

Do you follow any fantasy entertainment outside of books? (Video Games, Boardgames, Comics etc)

I think video games got me into the fantasy genre in the first place. I remember being obsessed with Final Fantasy VII (could never beat the last boss, though). And from there I fell in love with The Elder Scrolls games and scifi ones like Halo, and more recently, Destiny.

The worldbuilding is fantastic in these games. So playing them is a more three dimensional way of exploring a fantasy world.

What kind of books did you read that contributed to your upbringing, as far as fantasy and science-fiction?

The books that really grabbed my imagination when I was a kid were Road Dahl’s series. Charlie and the Chocolate Factory, The Twits, James and the Giant Peach… I loved the adventures and the escape of them all.

As I grew older I remember loving the Artemis Fowl books and then The Hobbit swept me away, quickly followed by the Harry Potter books.

In all I had a pretty fantasy filled childhood, book-wise.

Was your upbringing pretty geeky?

Not particularly. My dad was a professional footballer so wasn’t massively into books and reading. My mum is a very good poet but does it just as a hobby.

I naturally moved toward the more geeky side of things but sometimes now when I go to conventions I feel that I’m not geeky enough. So I don’t know what you’d class me as.

Why should anyone read your book?

If you love stories about characters that grow, change and achieve incredible things despite the odds, you’ll love Pariah’s Lament. Stories are all about characters for me, and on their journeys Isy and Edvar have to overcome a whirlwind of crap.

There are epic battle scenes (likened to Brandon Sanderson’s by reviewers), political intrigue, and even a hint of romance—something I didn’t quite intend on but it works.

And if you’re still not sold, check out these reviews.

Do you have a process, do you plan or do you fly by the seat of your pants?

I’m quite an organised person but I also like to wing it and explore.

So in the past I’ve written novels and stories planned to the letter, and more recently I’ve begun a novel that I’ve not planned much at all. Had a lot of fun with the spontaneous process to be honest and I like the results, but I did run into a bit of a wall.

A hybrid approach is the one I prefer most. So sometimes I plan, sometimes I see what happens.

How long does it normally take you to write a fantasy novel, and what proportion of the time is spent doing what?

A good question! I’m getting quicker, which is a good sign. It all depends on how much free time I have.

My first novel, unpublished, took years, but it was mostly spent with me learning and exploring my craft.

My second novel took me two years from start to finish.

The one I’m working on now is halfway done and that’s taken 6 months of part-time writing, so I’m hoping it won’t take much longer. I’m considering a NaNoWriMo style blitz to get it finished. We’ll see if time allows it.

What is your favourite part of the writing process?

Writing the first draft. It’s just me telling myself the story. I’m discovering and learning as I go and I love seeing all of the different directions characters can take you.

Editing is a chore sometimes, but I love the process of assembling the literary jigsaw.

Have your previous vocations influenced your writing?

I was a lawyer before I dived head first into writing and I can’t say that I’ve ever written anything remotely legal-based. I don’t intend to either. I found it a boring job, mind-numbing even. I’ve had my fill and won’t be dipping my toes again.

After my lawyer days I ran an Irish pub and that was a great source of inspiration. A lot of people and stories have found their way into my writing. It’s been good fun adding them in.

Do you involve other people in your writing, as collaborators or editors? How do you make this work?

Until I’m happy with what I’ve created, I won’t involve anyone else in the writing process. At that point I reach out to some trusted beta readers, and then my editor, Anna. It works pretty well.

If you’d like to find out more about my writing, you can discover more via the links below.

I have a biweekly newsletter for writers packed with tips, guides and news, plus access to an online writing group.

If you’re interested in my books, you can get the first few chapters of Pariah’s Lament free when you subscribe, as well as a bunch of short stories. Just head to any of the links below to find out more.