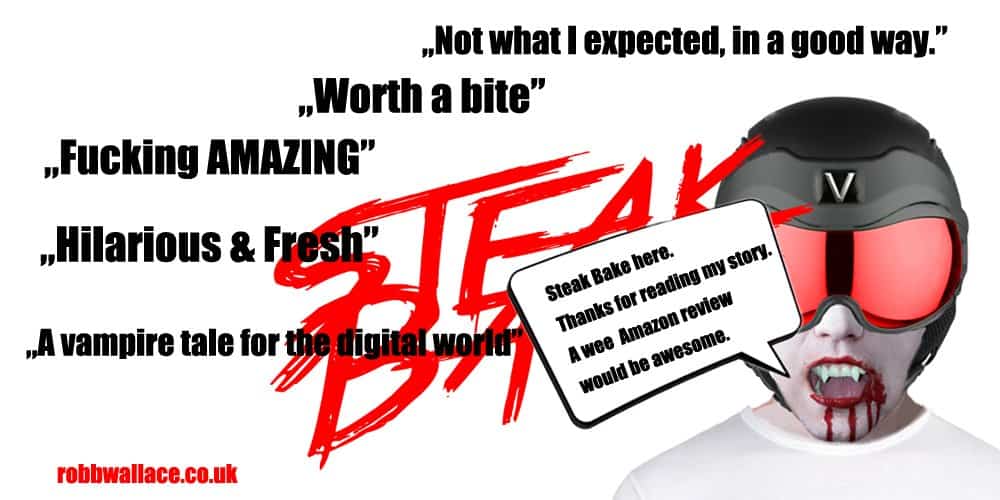 I started with the idea of an urban fantasy setting, with the idea of setting it in a futuristic world where the vampires rule and the humans rebel. What I ended up writing was something akin to the movie Falling Down staring Michael Douglas, directed by Joel Schumacher.

I planned for one thing and created something completely different, yet something fresh to me. Steak Bake is like “Falling Down” in Glasgow and instead of the main character losing it and becoming a raging vigilante trying to get to his daughters birthday. Steak Bake (actual name Jason) loses it as his ration of humans is reduced to seven. In Steak Bakes world the humans and vampires live in harmony, well maybe not harmony but they live and work in a functioning society. But over time the “rotation”, the number of humans each vampire has access to for feeding continually decreases. And when it hits seven Jason snaps and takes things into his own hands.

It’s a quick read vampire story where the main character, who is a vampire, begins hunting and killing other vampires.

I originally set out to write the story in a kind of sci-fi style, but one page in and I found myself writing in the principal character’s voice like a blog. Everything you read in this vampire story is a transcript from his blog. I really enjoyed this as it gave me scope to make it gritty, gave me the chance to allow the key character to interact with folks leaving comments on his blog. Gave me a great platform to show how Steak Bake reacts and interacts with the headlines he is generating, the dilemas he is faceing etc.

So hopefully, I have penned an enjoyable short vampire story that both fits with the vampire genre and the vigilante “Punisher” style well.

Looking for a short story to rip through? STEAK BAKE is a short vampire story set in #Glasgow #Scotland He is a foul-mouthed, vigilante, vampire kille